Not really an issue around here at the moment but still...
Inspired by several Pinterest posts, I made a little succulent garden. 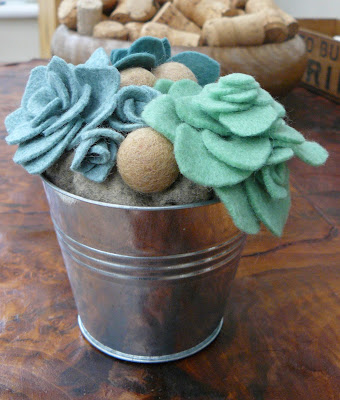 I mixed and matched a couple of projects I found on there. I made the green succulent  at the right from individual oval shaped leaves, roughly following this tutorial except that I hand cut the oval shapes, and stitched them together rather than hot gluing them..
Why on earth wouldn't you sew these together? By the time I've found the glue gun in the garage, remembered where the spare glue sticks are, left it to warm up and burned my fingers twice I could have sewn half a dozen of them.

As an aside, I don't understand the need to make everything "no-sew", especially with felt. Once many many many years ago I lovingly followed the instructions on Blue Peter to make a "lovely felt sunflower pincushion for Mother's Day". It involved gluing a stuffed felt centre and petals onto an old sticking plaster reel. It took me ages. And used a veritable lake of glue to get the felt to stick to the metal reel, or indeed itself.
It did, in fairness, look lovely (or at least it did to my juvenile eye), but the glue had left the felt so stiff and hard that it was impossible to stick any pins in it, I was devastated.
I decided then and there that glue and felt do not mix, and I've never seen any reason to change that view 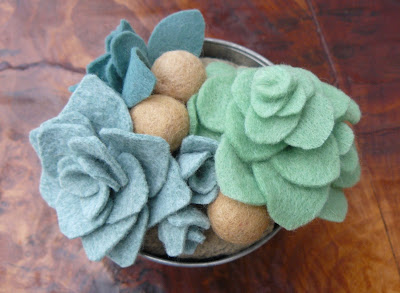 The bluish one at the back was made by rolling and pleating a long strip of  spiky leaf shapes in a similar manner to this tutorial. Again stitched not glued.

The glaucous looking one with the two little offshoots at the front left I kind of made up my own method for, and actually I think it's the one I like best.
The "pebbles" are just some wool felted balls I had lying around

Great miniature garden!
We used to attempt a lot of the Blue Peter projects even though Mum wouldn't buy us sticky backed plastic or let us use toilet rolls (we had to cut kitchen rolls in half because of hygiene!). The best thing we made was a moon landscape using an entire roll of tinfoil for my little brother's space Lego. Mum suggested we donate it to the little boy next door when we moved house. Don't know why she didn't want a two foot square space landscape coming with us...

Very nice and definitely saves water! I do use glue with felt sometimes, but I have to use it sparingly so it doesn't show through. Depends on the project.. sometimes it really is faster.

That looks great Christine, I use fabric glue on some things but find sewing generally gives a better finish.

That looks fabulous and I have to admit that the blue-ish one is my favourite too. Congrats on such a brilliant finish.

Love the colours of your garden and the look of the finish.

Surely felts too fluffy for glue? and with it being nice and soft its easier to whip a needle into it and get it to do exacty what you want with it......great planter you 'grew'

Now that is my kind of plant!! Very cute idea, Christine

What a good idea. These types of plants would suit me as I'm well known in my family for 'killing' plants. I'm useless at looking after the real thing!

Love this project! I'm with you on sewing over using glue. Great job!