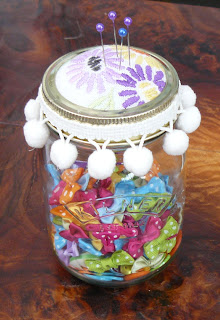 Remember the sad Kilner jar from last week?
I took your suggestions on board, and now he is full of jolly buttons and bows and has a pom pom trim collar. Much better!


It is opening day for the Summer Exchange on Needlecraft Haven 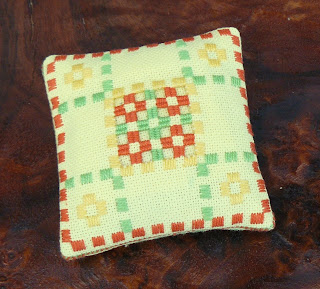 I received this beautifully stitched citrus coloured Hardanger pincushion from Rachael.
(The colours are bit brighter and more zingy in real life.)
Thank you Rachael, I love it. 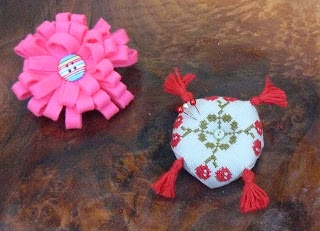 I sent this felt corsage and  biscornu pincushion to Angie. 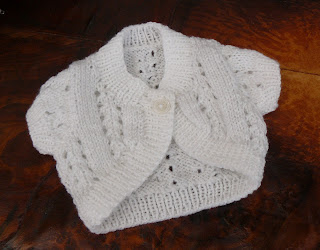 In other news, I've been doing some knitting. This little bolero is for a friend who is expecting a baby girl.
I did the newborn size and it looks so tiny, still I suppose newborns are tiny... 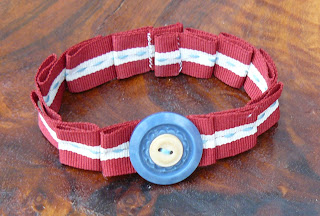 So, I was trawling the interwebs yesterday and I saw this tutorial  at Positively Splendid, for a pleated ribbon cuff. The tutorial said it took less than an hour.
Challenge accepted.
Actually it took 45 minutes including 2 minutes hopping round swearing when I ran the needle under my finger nail, and 10 minutes looking for the perfect buttons.
I'd call that Win #1
(The original cuff  is decorated along the middle with diamante trim, but my ribbon already had that lovely saddle stitch detail in the centre which I didn't want to hide, so I left that off, and added a couple of vintage buttons instead. Oh, and I reversed the direction of my pleats at the centre point instead of having them all go the same way.) 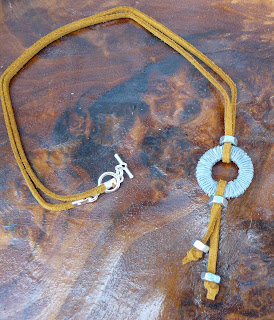 Win #2. My new washer pendant. I love how this came out.
Tutorial time (no pictures, because, honestly, it is too simple to need them)
You'll need:
One 1" washer
Four hex nuts
Hemp twine
Two lengths of suede thong ~ one the length you want the finished pendant to be and one about 4-6"
Two cord ends and a clasp
Craft glue


Smear your washer with a little craft glue and wrap with the hemp twine (think making a pom pom with a card circle). Don't cover it too tightly, you want a little of the metal to shine through.
Leave to dry.
Take your shorter length of suede, pass one end through the washer and then thread a hex nut onto both ends and pull up snug (it should be quite a tight fit, it helps if you cut the thong ends at an angle). Now thread a hex nut onto each end seperately, slide up to desired length, knot the thong ends and trim off excess.
Take your longer length of thong and pass through the opposite side of the washer. Thread your final hex nut onto both ends as before.
Finally add a cord end to each end of the thong (I like to add a dab of glue as well for security) and attach your clasp and voila!
Simples, as your friendly local meerkat might say. Linking this up to Think Pink Sunday on Flamingo Toes 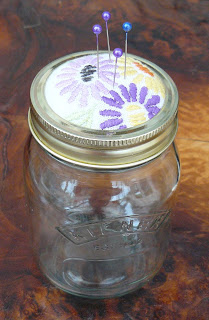 And now, to show that things don't always go according to plan, a craft fail. I've been admiring all these kilner jar finishes on other people's blogs, and one of my vintage embroidered tray cloths had suffered a minor altercation with a bottle of port, so I rescued an unstained portion and made this pincushion jar.
Oh dear.
This did not come out like I'd planned. It just looks sad and unfinished. Any ideas for salvaging it? 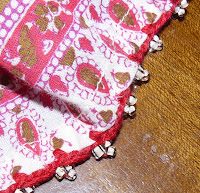 And the thrifty upcycling? I was in a charity shop a week or so ago and  found this rather gorgeous Monsoon dress. The fabric was beautiful, and the hem was entirely finished with this adorable beading detail
and it was about three sizes too big. Honestly it fit like a marquee. I could have held a circus in it, but you know me, it had to come home anyway to see what I could do with it. (Much to the woman in the shops dismay when I said I was going to cut it up, I might add). 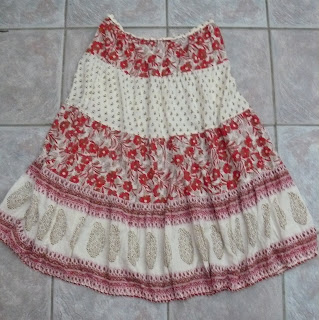 Anyway a litlle snipping and stitching later (and a few choice words when I realised I'd made the casing about a nanometre too narrow for the elastic I had), and I've got this floaty new summer skirt.
Now if only we had a summer...
7 comments: 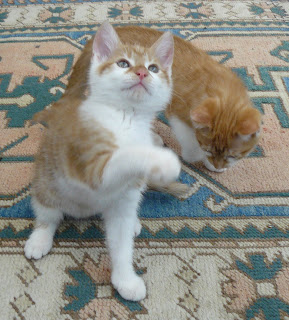 Well I did warn you. We got kittens!
This is Loki,
(aside: when we first saw the movie Thor, Eloise and I looked at each other and said "Is it just us or is Loki cute?", anyone who agrees might be interested to know that the BBC will be showing new versions of Shakespeare's plantaganet plays soon, and Tom Hiddleston will be playing Prince Hal/ King Henry) 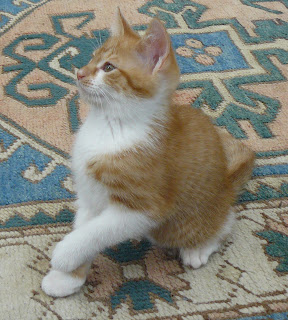 and this is Jinx 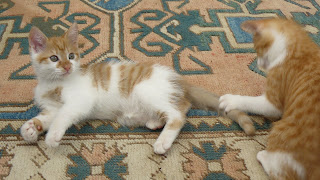 this is a game called "Kill your brother's tail" 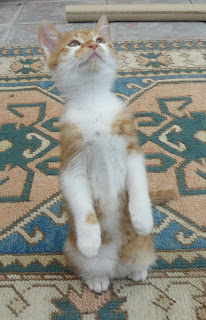 and this is "Pretend to be a meerkat until you get a biscuit". 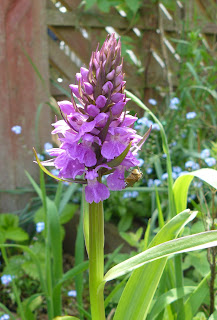 Meanwhile in the garden I'm cultivating a better class of weed wildflower. This is a wild orchid (with convenient fly for scale!)

PS: "Hop" over to Milly's blog for a chance to win an adorable crochet bunny
14 comments:

Jubilee and other Joys 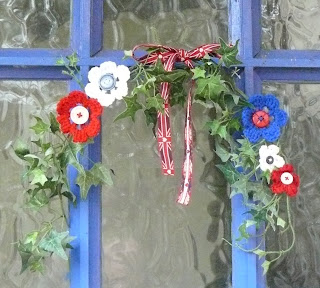 I don't know about the rest of you, but I am so over all the tacky plastic Jubilee decorations that have sprung up everywhere like a rash in the last week or so. I had grand plans for a spectacular yet tasteful Jubilee wreath for the front door, but time got away from me, so yesterday I improvised with some left over artificial ivy from Naomi's carnival float, a handful of crochet flowers, a few buttons and a bit of  Union Flag ribbon. I think its got a bit of a vintage vibe going on. 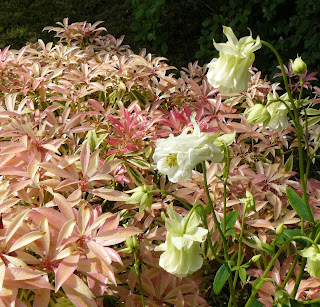 We've been basking in late spring/early summer sunshine here, and the garden is flourishing, highlights at the moment are the aquilegias, they are promiscuous little blighters, and seed themselves everywhere, (don't let this one's innocent white flowers fool you, it is a strumpet and is growing smack in the middle of my pieris) 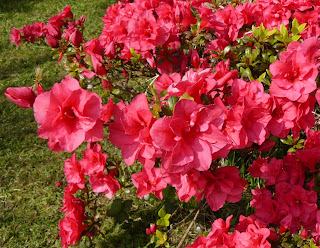 and my azalea, which is kind of like being smacked in the eye with pink! 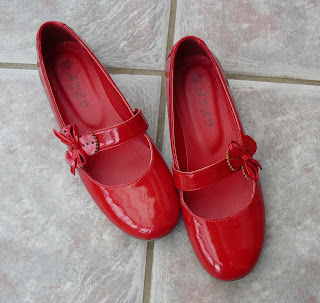 And finally, as they say on the news when they get to the frivoulous bit...
At a wedding we photographed last weekend, the Bride rocked a pair of red patent dolly shoes.
I was smitten. I had to have red patent dolly shoes.
(I know, me + shoes = weak).
These arrived yesterday (I <3 Ebay).
I haven't owned red patent shoes since I was about three years old and I just love them to bits, they make me totally and irrationally happy. I spent the evening skipping round the house in them going "I've got red patent shoes" somewhat in the style of Captain Jack Sparrow with his jar of dirt.

What makes you irrationally happy?
13 comments: