A touch of autumn and a small give-away

There's a touch of autumn in the air today. Don't you just love these mossy old logs? No? You just want me to shut up and get to the giveaway? Well OK then.
In a Cath Kidstone-esque moment, I bought a couple of old plastic bangles in the local charity shop, covered them with gingham ribbon and decorated them with ric-rac braid, buttons and ribbon rosebuds. I thought they would look very shabby-chic.
Which they do. 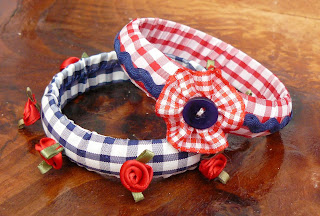 To my chagrin however (great word that, chagrin, I should use it more often) I discovered on finishing them that they are far too big for me (I have tiny wrists and hands), and fall off of their own accord. Note to self: try them on first next time. Anyway, rather than throw them away I thought I'd see if anyone here wanted them. I might even add a few other goodies in too. Just pop a comment on this post if you fancy them, and I'll put any names in the teacup of destiny next Sunday

Your bangles are lovely Christine and I would love to be able to take a chance in winning one for my "cool" grand daughter.

Will have to keep a look out for bangles in the charity shop and try to make one if I am not lucky in winning one.

What a super idea, very cool

I love to look at old logs, even better when i can put them onto my open fire and watch them keep me nice and cosy and warm on a cool autumnal evening.

Those bangles looks so lovely. You did a great job on them.

The teacup of Destiny? Is that anything like the Stone of Scone? Hey, love the bangles and I have fat wrists! So, put my name in that teacup! Great reuse of old stuff; love the idea.