First of all I'd like to say welcome to all my new followers (waves cheerily), who found me via the Grow Your Blog Party (see previous post). 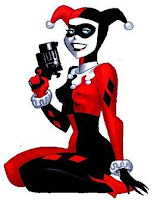 Those of you who have been here a while, on the other hand, are probably aware that Eloise kind of channels Harley Quinn. ~ for the uninitiated, Harley Quinn, or Dr Harleen Quinnzel as she is otherwise known, is a villainess in the Batman Universe.
Anyway Eloise's little heart desired a Harley Quinn hat to keep her cosy in the frozen north Leeds. I found a knitting pattern (King Cole 3442) that might work although it will need adapting as it is child sized and the points are too long, (it might well adapt to a fairly convincing Ahsoka Tano hat come to think of it)  but I decided I wanted to make a fleece one. I scoured the interwebs like a thing possessed for days, but I couldn't find a pattern or tutorial that was right so in the end I made my own up. 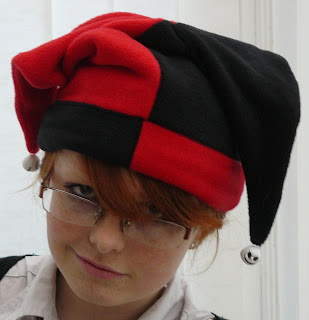 Here is Naomi modelling the finished article. With a rather belligerent attitude, I might add. You don't mess with this kind of villainess people! Obviously after this picture was taken I had to set to and make a second one because she wanted one too. (The difference between the two girls is that Naomi will treat it as a costume whilst Eloise will go out in it on a n ebveryday basis. Why not? She's been to her lectures dressed as Batman before...)

So having figured out how to make one I thought I'd "put it out there" in case anyone else was sharing my unsuitable-jester-hat tutorial dilemma.

You will need:-
Red and Black fleece fabric (I bought 1/2m of each and there was easily enough to make two, in fact I'd probably get a third one out if I wanted)
2 large white jingle bells (I got mine from EvilBay, they have little Jack Skellington faces on them). If you can't find any suitable bells you could always use pompoms instead)
Sewing machine and cotton

First you need to make your pattern. This needs to be 50cm up the long side, 35cm up the short side. The width at the base should be head circumference divided by 4 plus 1cm seam allowance. For this one head circumference was 56cm so 56/4 = 14 + 1 = 15cm. (Eagle eyed readers will recognise that my pattern is cut from the Garden News but any old bit of paper will do) 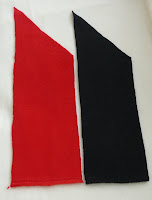 Cut 4 of these pieces, 2 each from the red and black fleece  Note: for an authentic half red half black hat like mine fold your fleece in half and cut two together ie a left and right facing piece, if you want your hat to alternate colours front to back as well as side to side cut the pieces separately so they all face the same way.

Place a red and a black piece right sides together and sew down the short side. Seam allowances are 5mm throughout. Open out and finger press seam open. Repeat for other pair. 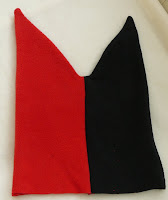 Place two pairs right sides together and stitch together up both long sides. Now stitch from one point down to centre of "valley" and up other side to 2nd point. I found it easier to turn the finished hat if I curved around the valley rather than pivoting at the centre seam. Trim off excess at points and clip to stitching at curve in valley.
Note: This photo shows the hat turned right sides out but you don't actually need to do that at this point. You can see what I mean by the curved valley though.

Lay your hat flat and cut off a 10cm slice from the bottom edge. This will form the band. Flip the band over so that alternating colours line up.

Slide band over the bottom of the hat, aligning raw edges, with the wrong side of the hat facing the right side of the band, and matching all seams. Stitch

Turn hat right side out. Use a pencil or knitting needle to poke the points out as far as you can. Flip brim up to right side along seam line and tuck in the raw edge (I turned in about 2cm, but if you want your brim narrower you can tun in a bit more), pin in place, matching seams, and top stitch very near to top folded edge. 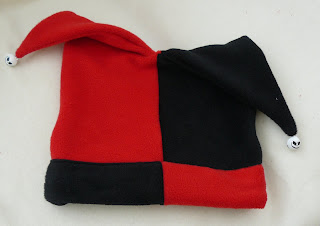 Hand sew a jingle bell to each point.
Place on head, flirt with The Joker and generally terrorise Gotham.
Linked up to Make it Wear it (see link in side bar)

awww cuteeeeeeeeeee
i love the hat so much..
love for you x

Cute! She actually went to class as Batman? Marches to the beat of her own drummer it sounds; that's wonderful!

That's very cool, thanks for the tutorial

Such a talented mummy these girls have. It's brilliant.

visiting via Vicki's GYB Party and think this is a CUTE hat. You're so kind to give the directions.

Well done Christine and I love the photo of Naomi modelling it. It must be great having daughters.

Christine that is absolutely fabulous how clever are you. I do not think I would look right in it, but I know some grandchildren who would.

For those of us who try hard but still manage to get some seams on one side and some on the other, a shiny ribbon sewn over the seams fixes all!

This worked REALLY well for me :) Best wishes from Germany! I will wear it for a Medieval-Castle-Themed Carneval Party! THANKS for sharing :)

I Made a Jevil from deltarune and it worked like a charm Thank you! 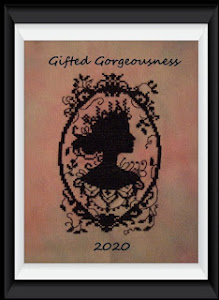