A Challenge, a Tangent and a Future Project 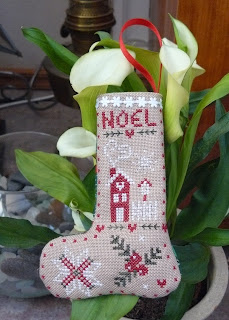 This is my finish for the Needlecraft Haven October Challenge. The original design, by Carmela at Balades et Broderies  (found here) is square but I rearranged the elements to make a stocking shape. The album of challenge finishes is here.

Last week I was a little cryptic about a tangent I'd gone off on after stitching my zombie kitty. I made a comment about having "an army". Jo came nearest to guessing, getting the right movie, (Avengers Assemble) but the wrong character. 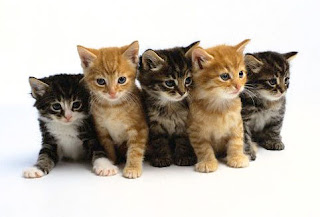 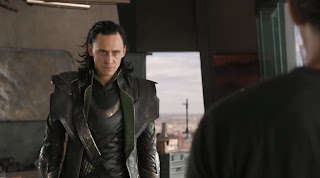 Isn't that picture adorable? (the kittens are quite nice too) 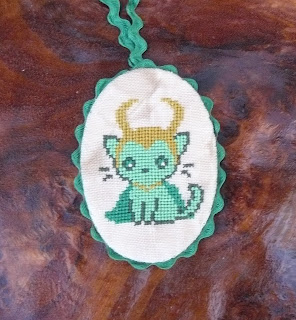 So, if you cross Loki and kittens you get LoKitty.
The basic kitty is the same as Carolyn's original zombie design but I re-drafted him to add a cape and a horned helmet
And I really am going to have to stitch an army of these, this one has been claimed already. 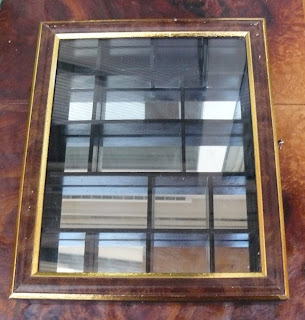 Finally I just wanted to show you this little cabinet, which I found second hand. Not much to look at is it? I have big plans for it though. Watch this space as they say...

Are all the kittens yours?
That is quite an impressive group.
Your Lo Kitty variation is definitely cuter than the original zombie but that is just my opinion.
I could do lots of things with the cabinet so I am waiting to see what you do with it.

wow wow wow that Loki Kitty is so cute!! I don't have an email for Carolyn as there isn't on one her blog profile.
She gets the ideas from someone who designs the little blinkies, there's a link on my blog!

Kitty love!! Great stitching finish and that cabinet is beautiful and elegant looking. Can't wait to see what you do with it.

I am sure whatever you do with the cabinet will be amazing.

It was very windy on the south coast last night, how was it on the north coast?

Love those kitties and your cabinet looks very interesting.
Like the challenge piece really must start that again next year if you are still running it.

Christine your level of creativity never disappoints! LoKitty! Love it and so brave to rearrange a design to be a stocking instead!

I love your challenge finish, so clever. Lokitty is adorable.
Nice cabinet!

What a great challenge finish, Christine--the stocking is adorable!! I would never have thought of rearranging the motifs into that shape--brilliant :)

I'd better stop before I resort to less and less intelligible words, lol!

Watching away with great anticipation...

Love the challenge piece! A girl can never have enough Christmas stockings. :-)

P.S. - Are you still crocheting? I have not seen you mention it lately.

You are very creative. I once did cross-stitching and my fave designs are the cottages.