You might remember me stitching a little Jean-Luc Picard Christmas ornament earlier this year (see this post). I mentioned at the time that I wished I knew the Klingon for Merry Christmas. Well isn't the internet a wonderful place? Thank you to everyone who helped me out on that. I now know that the appropriate phrase is QISmas Dativjaj, although Klingons don't really quite grasp the concept of "Merry".


Or Maybe they do.

"Romulan Ale Should be Illegal"

"I now know", reminds me that someone at the education department seriously suggested the use in schools of the phrase "We all now know" to demonstrate successful learning objectives. Strangely the acronym never caught on...
So anyway, back to Trekkie goodness, and off to Black Tulip on Deviant Art I went to get the matching Lt Worf pattern. Sadly I only had 32 count blue linen left and he came out smaller than Jean-Luc, so I had to stitch my beloved Captain a second time to get a matching pair because I'm a very slightly OCD kind of a geek that way.
J-L #1 is going to a brand new home with a friend of Eloise's in case you were wondering. Two Captain Picards on a Christmas tree would be excessive... 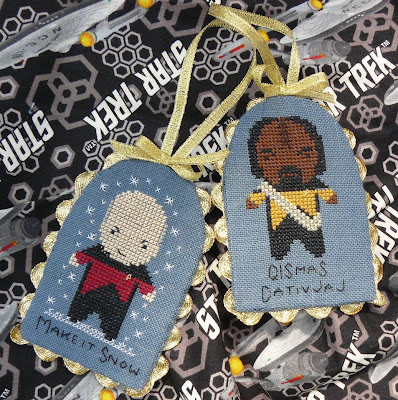 Look at the little biddy Klingon, isn't he just adorable from the tips of his toes to the top of his little forehead ridges? And look at the amazing fabric I found to back them with!
Purists amongst you may note that the fabric actually depicts the Enterprise A, but to those people I say Pffftt!
Poor Worf looks a little put out at having been topped off with a pretty gold bow, but Jean-Luc, being a modern 24th century man, is comfortable enough in his own masculinity to carry it off. Probably the male pattern baldness. 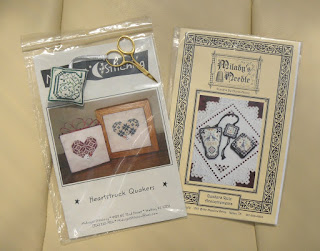 I got some wonderful post this week too. Dani kindly sent me the chart for the Heartstruck Quaker ornaments, together with a lovely stitched initial fob, and I won the Milady's Needle chart in a giveaway on Sally's blog. Thank you both so much. 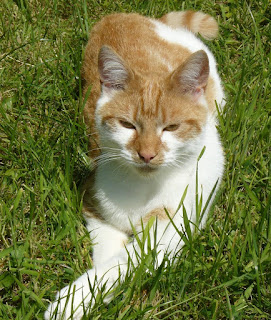 Meanwhile in the garden, summer seems to have arrived. Here is Loki posing for a picture. He is such a diva!
Jinx, as usual hid, from the camera, but as she looks just like Loki only smaller just back up from your monitor a bit and you'll get the idea... 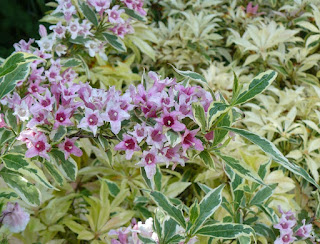 ...and here is my weigelia flowering its head off. There's a little story behind this shrub, a few years ago I bought one for my friend for her birthday and when I was wrapping it up a small branch broke off. Ever the optimist I bunged it in a jar of water and it rooted. Yay! She still thinks I did it on purpose...

great finishes and what lovely crafty post too. x

Loki is a very handsome chap, no wonder he likes to share his pic with everyone.
Blue fabric looks great for the Geek guys.
Super wigelea, isn't that how you are supposed to garden, share, share and share alike!
Congrats on your wins.

Great post Christine and well done with your winning goodies

lOVE the Make it snow ornie Christine it made me smile on a cloudy Monday morning.
Great backing fabric too. Congrats on the wins. We too have that Weigelia it is so pretty and what a bonus for you to have.

Perfect fabric for those great ornaments, Christine! Love your fob from Dani and those charts. I've only stitched one of the Hearstruck Quaker snowmen, but he turned out so cute I know I'll be doing more :)

Love your Trekker ornies! I have found some great Etsy shops selling all sorts of Geek charts. I'm in geek heaven!

Those look great! I might have to get my geek on...