So, today was the Village Football Club's annual "Funday Sunday", which comprises craft stalls, demonstrations, games, bbq, beer tent, entertainment and demonstrations in the village playing fields. Anyway we borrowed our neighbours' gazebo and went down and set up a stall with David's photos and my jewellery, including this new range of Pride and Prejudice jewellery 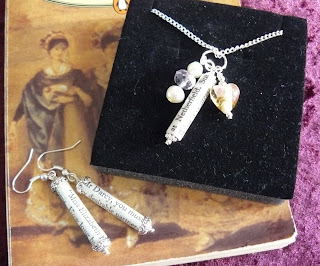 It was a beautiful day, as you can see from this general scene, taken from the front of our stall and looking across the field:-

Around 1pm we had a flyover from a Royal navy Sea King helicopter, here you see it coming in over the church:- 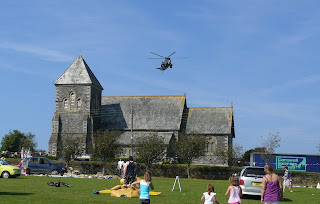 and here it is hovering overhead:- 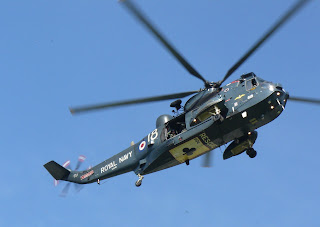 and about 15 seconds after I took this picture the downdraft caught our (borowed) gazebo, lifted it up, poles and all, ripped it clean off the guy ropes (which remained in the ground throughout) and carried it about 20 yards up the field, to the Slate Quarry truck and fire engine you can see in the first picture; assorted postcards, photos and earrings flying everywhere; before David and I, the entire football team and half the fire crew managed to catch up with it and wrestle the thing to the ground!!!

Poor gazebo is quite wrecked. Fortunately, we managed to pick everything else up and our neighbours are very nice people and were quite understanding about it. So that was my Sunday. How was yours?

Here I thought you were going to say that someone made a fabulous offer to you or David. Was I ever off the mark!

How exciting and terrible! I'm sure I would have cried.

Sorry to hear of what happened, atleast no one was hurt.

gawd I hate it when that happens, did you get much interest in your things?

Sheesh, wreck your stall & without so much as a flash of their uniform? Bummer! ;0)
Glad you weren't hurt & hope you had a successful day, despite the flyboys sabotage. :0)

Your jewellry is gorgeous!